There are two types of star tracker out there, one of which has counterweight (or sometimes called balance weight) attached on the other side of the tracker rotational axis, while the other doesn't. MSM Star Tracker is of the latter. Let's call this type unbalanced trackers for short. 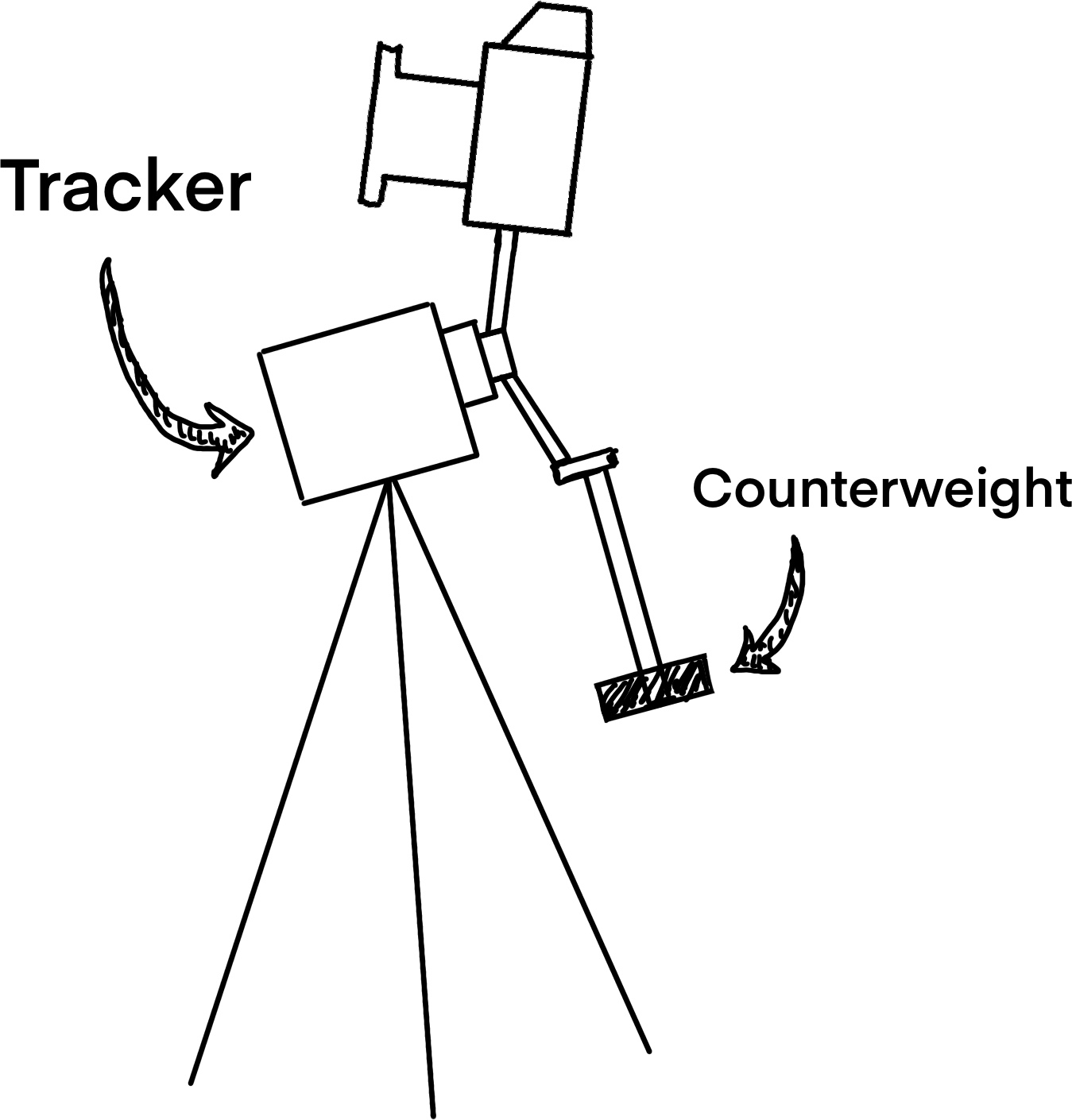 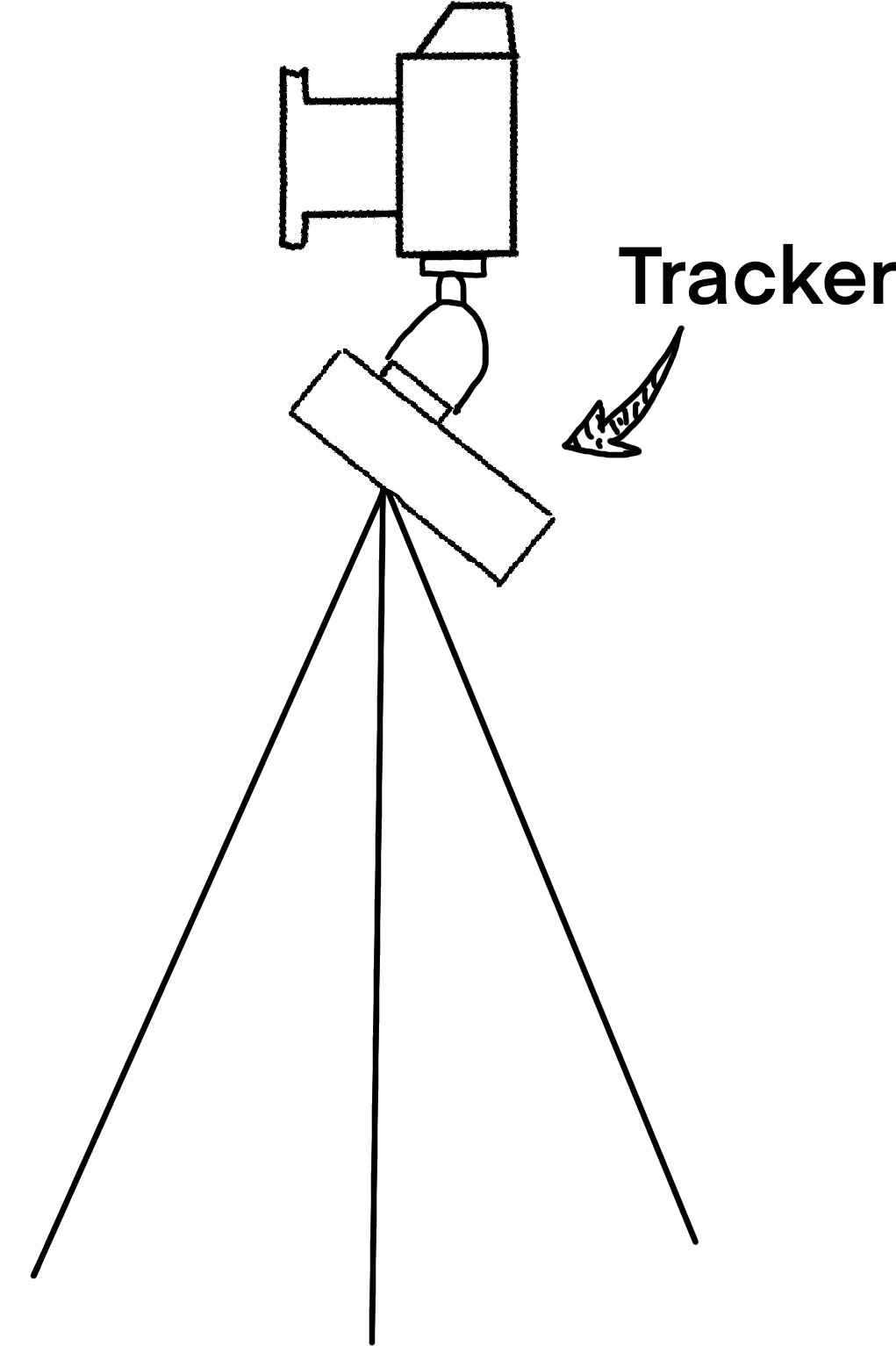 Compared with balanced trackers, there are some disadvantages that come with unbalanced ones:

Fortunately, with a little tweak in the camera setup all of them would be eliminated and what's left are the advantages that we buy unbalanced trackers for - compactness, superior portability, covering over 95% landscape astrophotography scenarios.

The tweak is so easy that there is only one simple rule to follow - the  15° rule. Assume polar alignment is properly done hereafter. Now think of a plane which is vertical to the ground and contains the tracker's rotational axis. Let's call it center plane. If we are facing right against to the side of tracker with the rotating plate, the center plane appears to be the red line in the picture below. 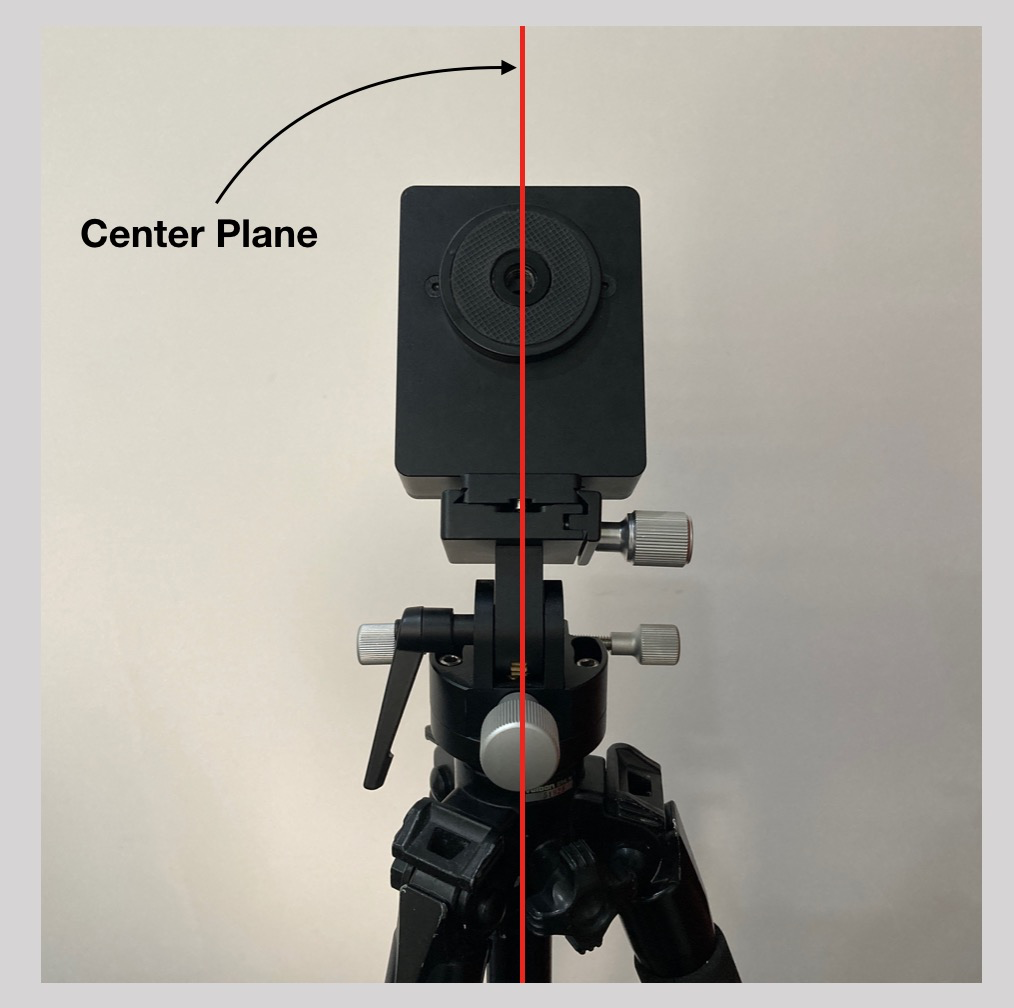 All you need to do before pressing camera shutter is make sure the center of gravity of camera (plus lens) falls into the 15° zone shown between the red and yellow plane in the picture below. Note that if we are facing the tracker side with the plate, the yellow plane sits on the right side of the red plane. This is the 15° rule. 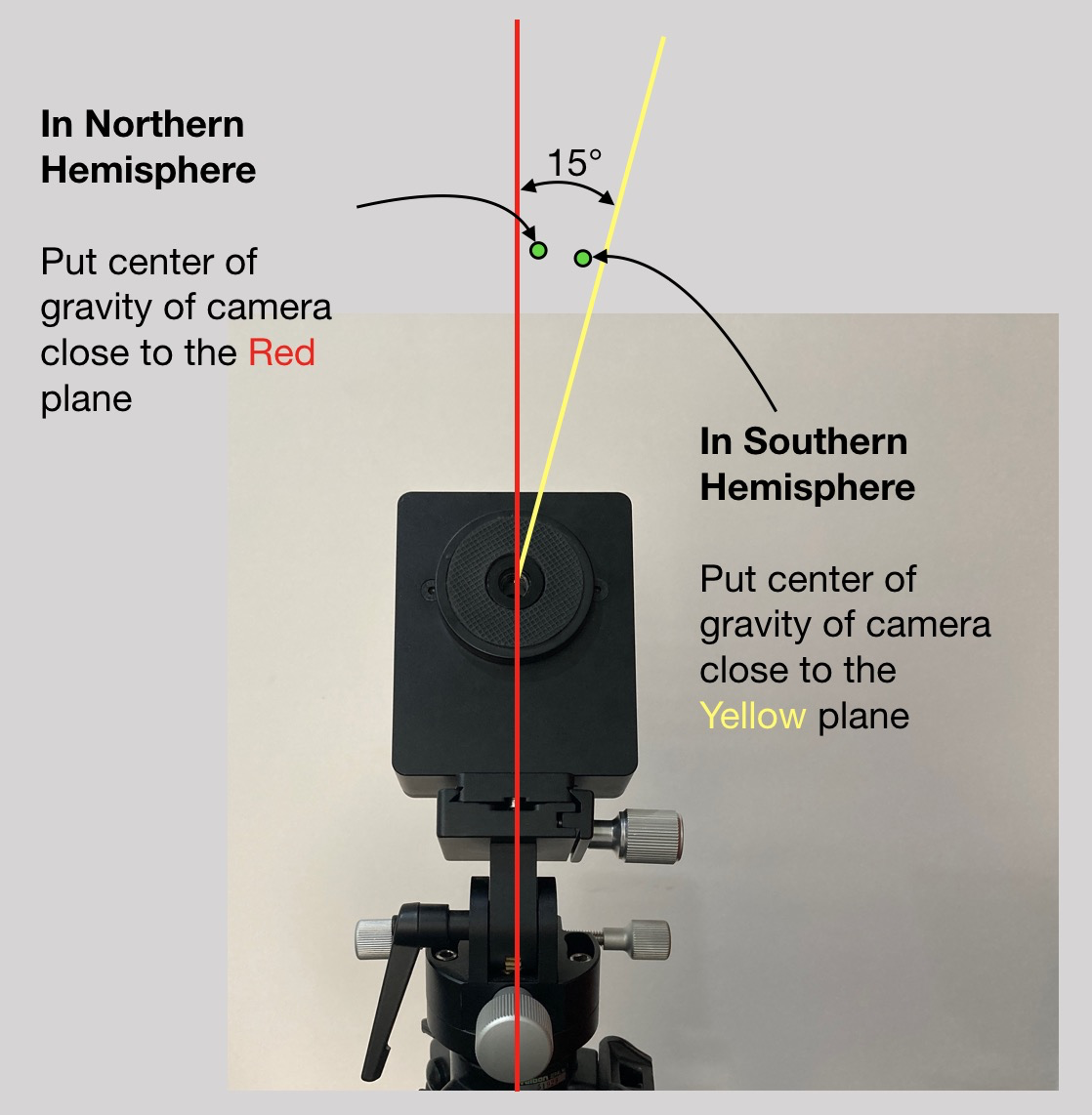 Here is an example (see the picture below) where the center of gravity of camera falls into the 15° zone. You can save this image to your phone album in case you need it out in the field. 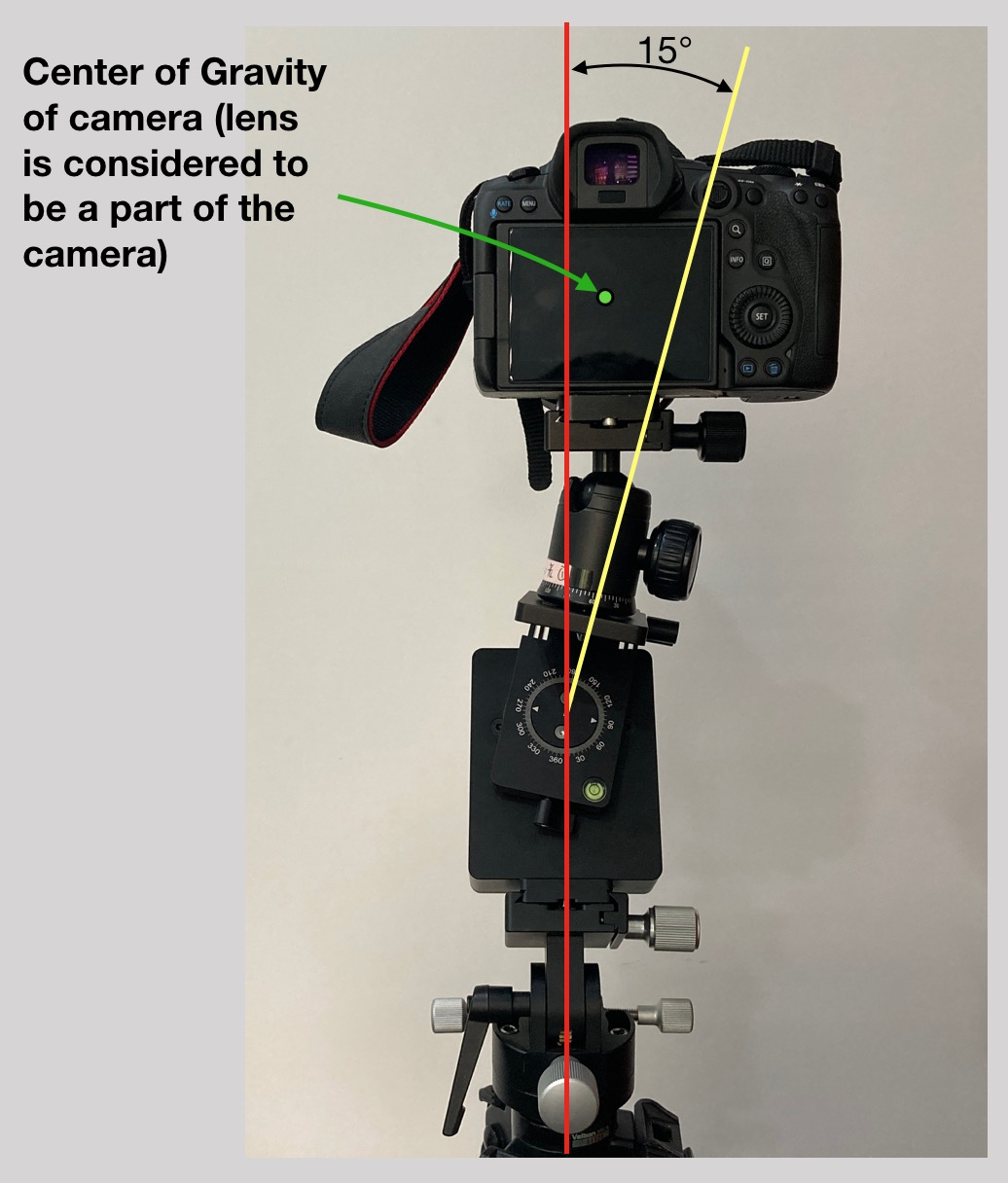 Let customers speak for us

I had been having difficulty doing polar alignment with the illuminator supplied by Skywatcher. Purchasing the Quick Polar Finder by MSM has totally eradicated any problems I encountered. It is quick, easy to use and accurate and has made my initial difficulties with polar alignment a thing of the past.

Excellent and robust product to establish initial polar alignment with the Star Adventurer 2i before fine-tuning with the units polarscope.

MSM has took my astro photography to the next level. Low noise images is no longer a dream. It’s is compact and portable, polar aligning is easy, my whole setup is 2-3kg and it handles it very well! Definitely recommend! 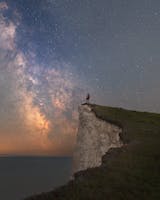 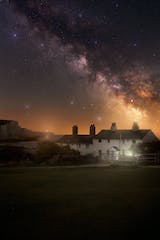 MSMs polarscope is a very nice addition to my portable grab-and-go astrophotography collection. Finally, a chance to experiment with a longer lens! Do a quick alignment with the lazer, and then tune that alignment with the polarscope. With care and patience, it is very quick to polar align and start capturing light. My first light test on Sadr in Cygnus with one minute subs at 135mm show no sign of trailing. (Bortle 4, Nikon d5500, Samyang 135mm, 64 lights and 24 darks, stacked in Siril). Very happy with the results from the addition of MSMs polarscope. Using the universal bracket for lazer and polarscope also makes things tidy, lightweight, and easy to setup. 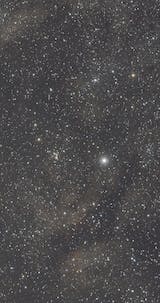 Love the laser pointer and the brackets. Fit perfectly. It gets the alignment done in seconds. I could track 2 min exposure with my 50mm lens and get pinpoint stars. Highly recommend it!

MSM is a lightweight star tracker for travel and is easy to use. 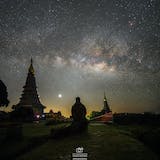 I still have the first version of the laser and got this one as it is adjustable. The laser seems well made but I still need to play with it a bit more as I’m getting 2 different alignments using the same bracket between version 1 and version 2.

This looks so much better than those 3d printed options available on "the bay". The finer lines should (hopefully) help to get a more precise focus. Can't wait to test this on a W/A lens - just need some clear nights.

Does exactly what it claims, and my setup was really easy. The tripod makes a huge difference to my photography. I definitely recommend this tripod and attachments. Fabulous.