The tracker works as expected. Better than expected if we lokk at it's price, but if you want to shoot with a telephoto, you'll need the polar scooe, and a great ball head or similar. Because it's very difficult to point to polaris.

As the rotator is lightweigth, the camera and telephoto are harder than the ballhead and it moves very easily.

I was looking for a product or I could easily pivot My camera back to level when using a storm tracker. The Z/V Star track mount fit the bill perfectly. Extremely well-made and very durable too!

Works great and can easily sight polaris for Milky Way shots using only the laser. Big bonus is that it is light enough to take backpacking.

I just used the V platform for the 1st time since i purchased it. It is very useful so far. It is strong and easy to set. It really helped me to balance my camera and find the angle i like once mounted on the tracker. I suggest to work on the best set up at home to be more accurate once on the field. Story to be continued !

C
Newest 2-in-1 Star Tracker (Portable & Simple to use)- Holiday Sale is ON now! C.V.
Simple and effective equatorial mount

The Move Shoot Move equatorial mount is lighter, smaller, and easier to use than any other equatorial mount I've used. The optical sight is compact, and the laser sight is hugely simpler to use for rough alignment than other systems I've used. I appreciate that it has an integrated battery that charges over USB-C, also a big improvement over the AA-based mounts I've used. It's also simpler -- lign it up and turn it on, no fancy gimmicks.

Longer than the one I was previously using, which lets it work with bigger lenses. The included controller is nice to be able to run it on low to stop dew and turn it up to keep frost off.

The mount is very well built, and adds allot of flexibility to the MSM mounting configuration. Also, I like how it lowers and puts the center of gravity over a better place on the rotator.

This is a fantastic add on to the Move shoot star tracker makes life so much easier.

D
Newest 2-in-1 Star Tracker (Portable & Simple to use)- Holiday Sale is ON now! D.J.
Slave mode is perfect

Actually I was looking for a rotator with a slave mode with the timelapse feature. The MSM rotator is perfect for my use

The Z/V Mount at first appears small and insubstantial
However, the engineering and materials proves to be a worthy mount.
Perfect companion mound for the MSM tracker,
Though not intended for heavy camera/lens combinations that exceed the MSM.
It strongly holds the camera for tracking without vibration or slippage. 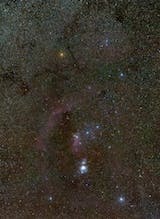 There is nothing to dislike about this headlamp. Two levels of brightness for the white light and strobe for both red and white make it very versatile. I especially like that it’s easy to switch between red/white with the large buttons on top and can change the angle of the light by tilting the part that the strap is attached to. It’s rechargeable, so don’t have to worry about batteries, and the headband is comfortable to wear. Very reasonably priced, compared to some of my other head torches. Does the job nicely.

Newest 2-in-1 Star Tracker (Portable & Simple to use)- Holiday Sale is ON now!🎁🎉

I was not sure at first if I was going to like this little tracker and I have used it for a year now and it is awesome! Great customer service and fast shipping when I need something. Simple to set up and use and with the new "Z" Plate it works even better. If you don't have it yet, get it!

Compact and very solid. I have yet to put on a long lens to see how it supports the weight hanging out over the front of the csmera.
The customer service is super. They contacted me to let me know that the mounting screw was subpar and sent another.
Very fine product.

E
Dew Heater Band for astrophotography E.
Tracker is good, laser fails when it is cold

The tracker has worked well for me (so far just with wide-ish lenses in the 28-50 mm range, I haven't tried it with anything long really), but the laser stops working whenever it is cold (below freezing) out. It'll work indoors, or if I keep it in my pocket for a while to warm it up, it'll work for a minute or so, but if I leave it installed on the tracker and let it cool off to ambient for ten minutes and then ty turn it on verify that my alignment is still correct, it won't power up.

B
Newest 2-in-1 Star Tracker (Portable & Simple to use)- Holiday Sale is ON now! B.D.
Very good little tracker for little money!

It is perfect for what it is made for except for the new type Polar Scope which does not fit snugly in its shipped adapter. I finally had to glue it in place before I could calibrate it properly without the change of moving later... .

I did managed 30 second exposures with a 300mm lens on my Olympus camera (600mm equavalent) but 20 seconds was more reliable in the end.

I also bougth the laser pointer but that prooved useless for me in dark skies where the laser beam was not visible!

I recently saw the Z/V Tripod & Star Tracker Mount by MSM in an Alyn Wallace's video on YouTube. I was impressed by the sturdiness and lightweightness of it.
I am a hiker and I like to shoot Milky Way shots in the mountains and I needed some way to polar align in a simple way without using my ball head. I can confirm now that the kit is easier to carry with me and it allows precise (for a wide lens) alignment to push my shutter speed and get very fine details in my shots. I definitely recommend it!

I have been using a Ioptron Skyguider pro for my astrophotography the past couple of years. But, carrying it on a plane with my camera gear is just to much.
The MSM solution is a great answer for my travels. The wedges are also a great addition for keeping things lite.
The tracking works fine for my type of milkyway photos.
I use a battery pack for additional power during long, cold nights.
Happy with my decision.

It’ s on my tripod since I got it. Very stable and easy to adjust. Congrats to MSM.

As someone who travels a great deal, this star tracker is ideal. Compact, capable and reasonably priced!